On to the biggest and most ambitious project so far, a double bed.  The idea I had in mind for this bed was fairly chunky and rustic, and to match the storage ottomon in colour and style – I guess the next thing for the bedroom suite will probably need to be side tables…

In regard to tooling this took most of the tools I had available, including having to buy another workbench (although saw horses would’ve work fine also) in order to manage the size of the individual pieces of wood.

The only real design requirement was the bed had to be capable of being dismantled for transport, which make the design considerably more complicated as we also don’t want the piece to creak under stress.

Style wise it’s fairly typical, I omitted the headboard to keep it minimalist – although it is possible to add one later or work one into the design by extending two of the legs and adding a second cross piece.

The legs, head and foot, and sides have all been offset slightly to add at least some character to the design.  I will admit the bed and in particular the joints holding it together were designed and redesigned at least a dozen times before settling on this one. 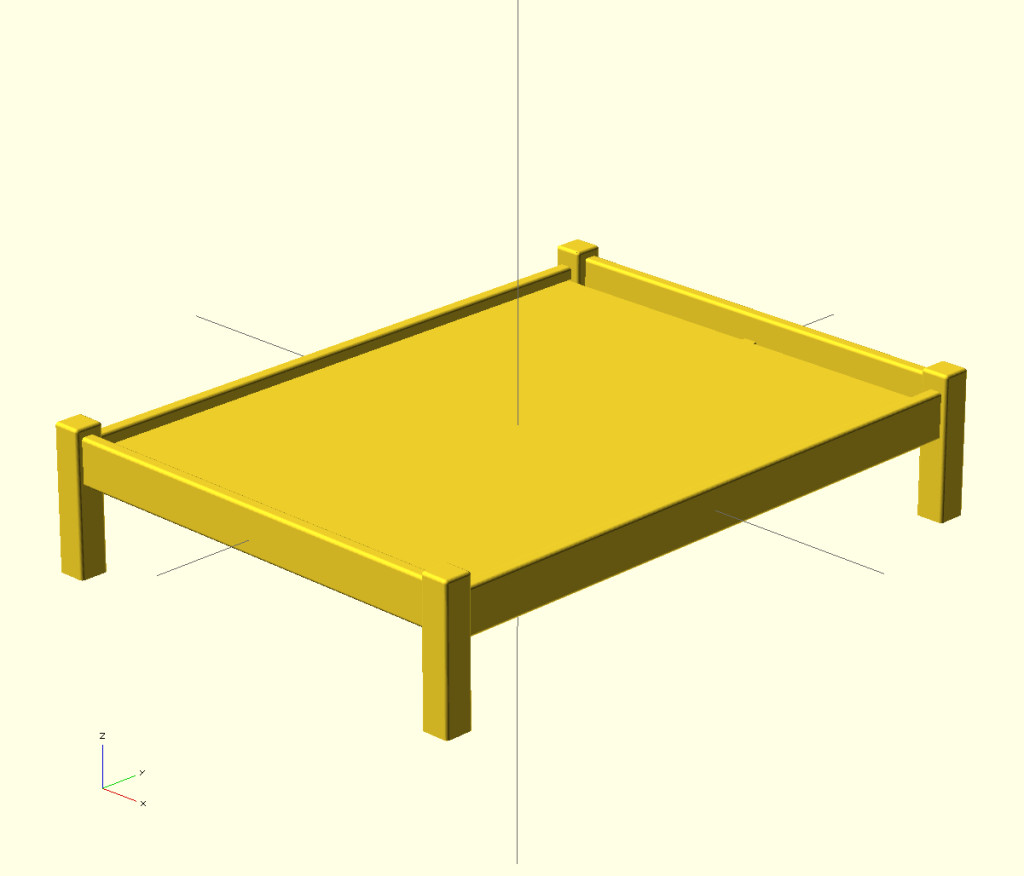 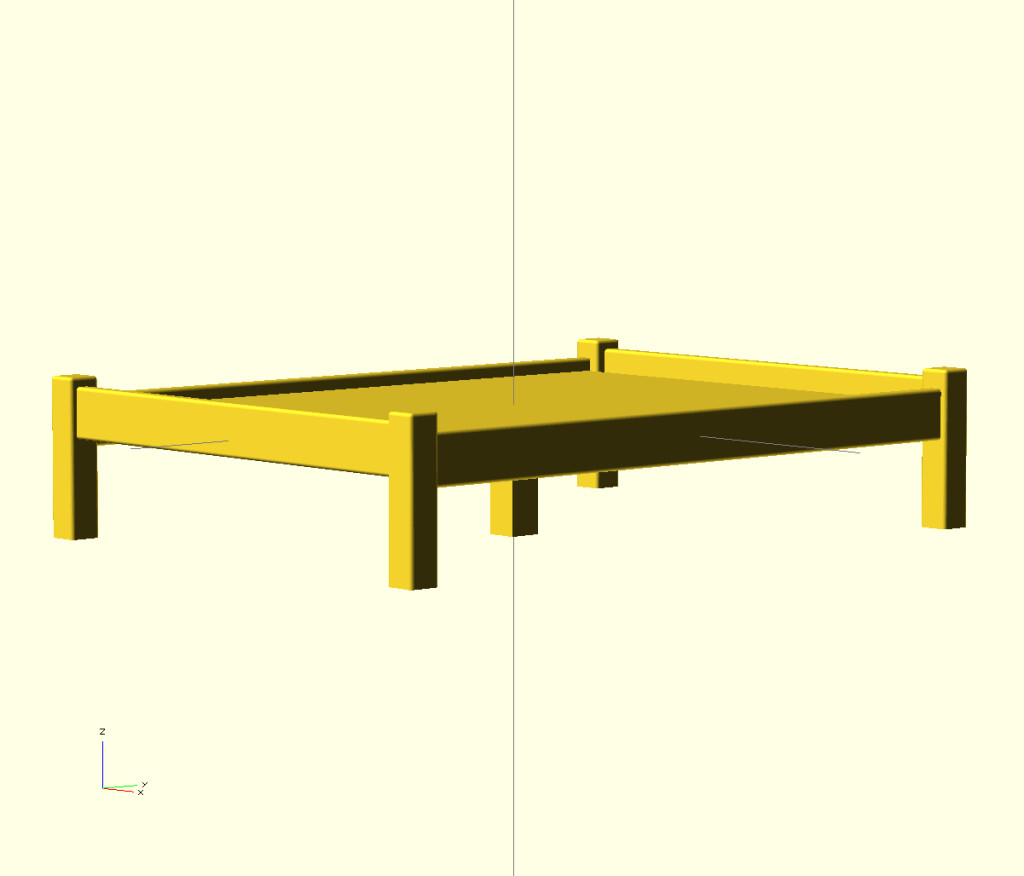 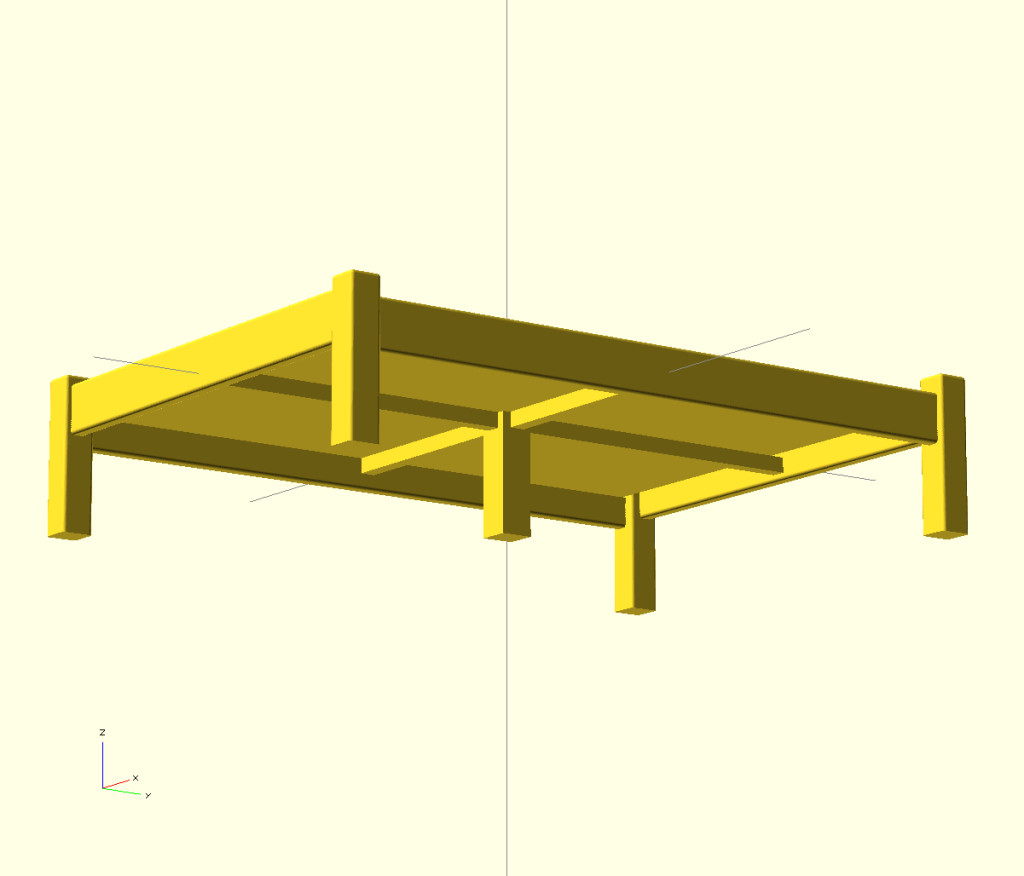 A cross piece and fifth leg were added to the design to add some structural support to the centre.

The last estimate I had for total costing (which included 20x 100 mm roofing bolts to pin everything together) came to between £120 and £125 for the bed, which is not too shabby!

Again the exploded views make the construction a lot clearer:

So the side pieces are supported by the large mortice and tenon joints (there a dozens of Youtube videos available demonstrating how to chisel these, and much more clearly than trying to explain it words) the tenons for these were cut to 35 x 75 x 60 mm so I really mean large!

To secure the bed together (as it could not be glued) bolt holes were drilled through the insides of the legs and through the tenons such that the unit could be pinned by roofing bolts. 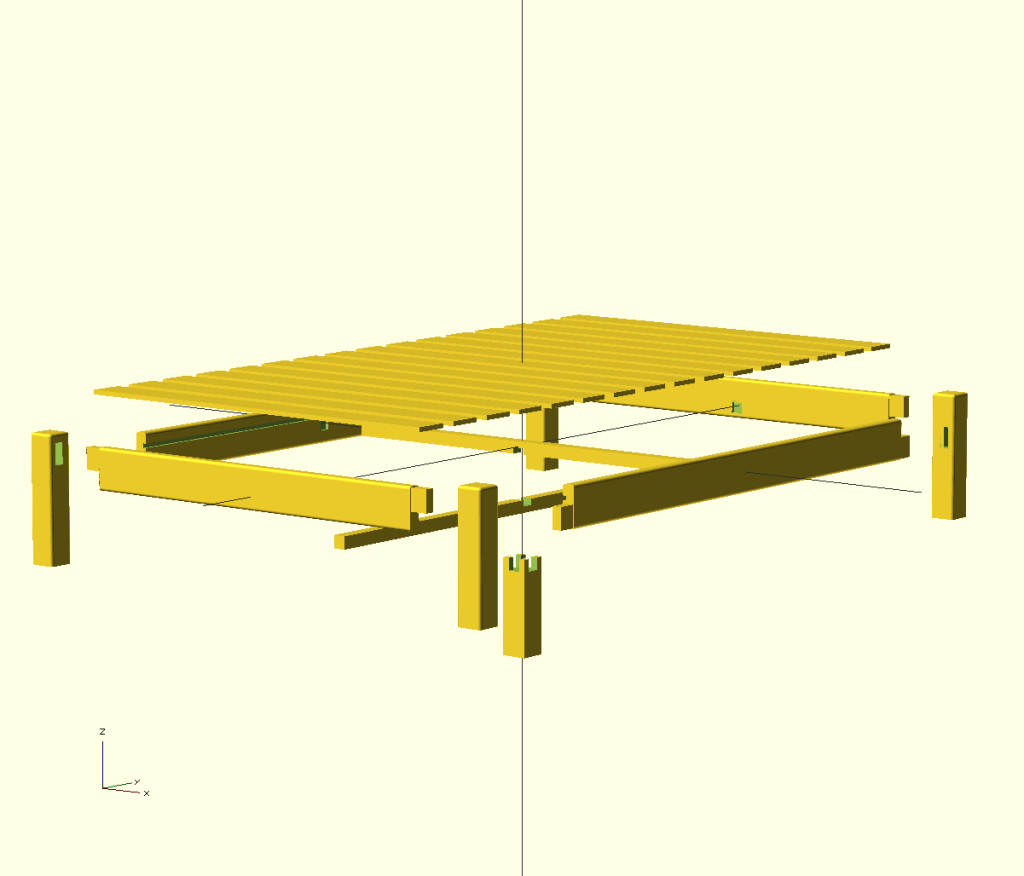 You can start to see from this view the slats are supported from a groove routed (using the router with a straight bit and a guide) into the long sides which runs the full length of the piece. 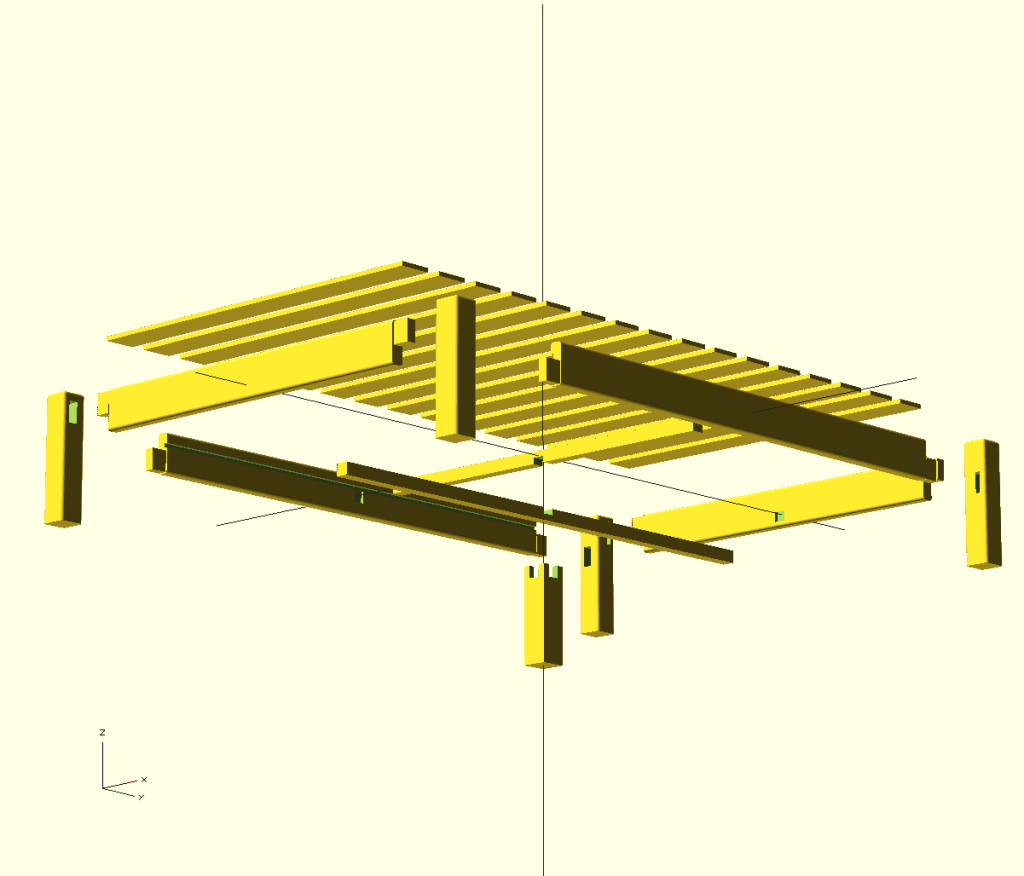 In this view it’s possible to see that square recesses have been chiselled into the side pieces in order to invisibly support the cross pieces. 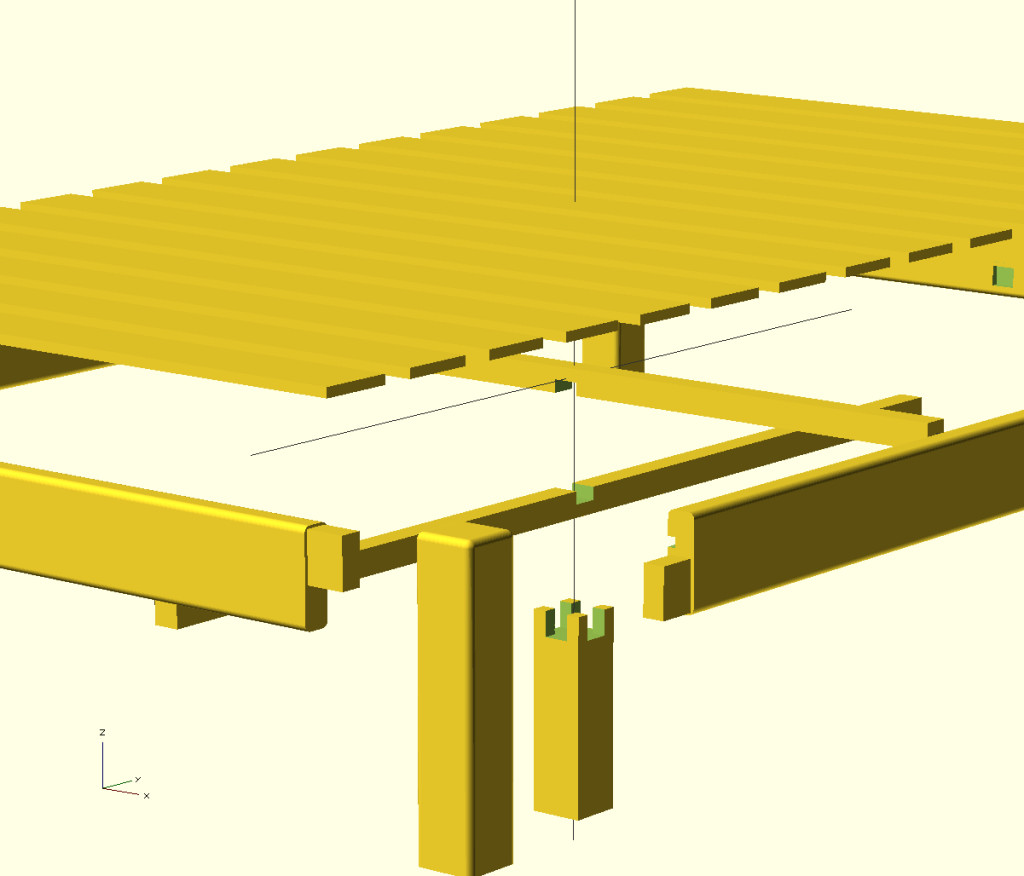 And from here is possible to see the design of the central support; the cross pieces connect by a half and half (or housing) joint, which itself in then housed in the fingers of the fifth support leg.

On top of the main joint, as can be seen from the model all the exposed edges have been rounded over using the router to give a smoother more aesthetic finish.

To finish again sanding to 120 grit, following by staining with my favourite stain 😉 one coat of Mann’s Medium Oak pine stain in order to match the ottomon (which can be seen in the left side of the image) and then several coats of the Mann’s Extra Tough Satin Varnish to finish things off. 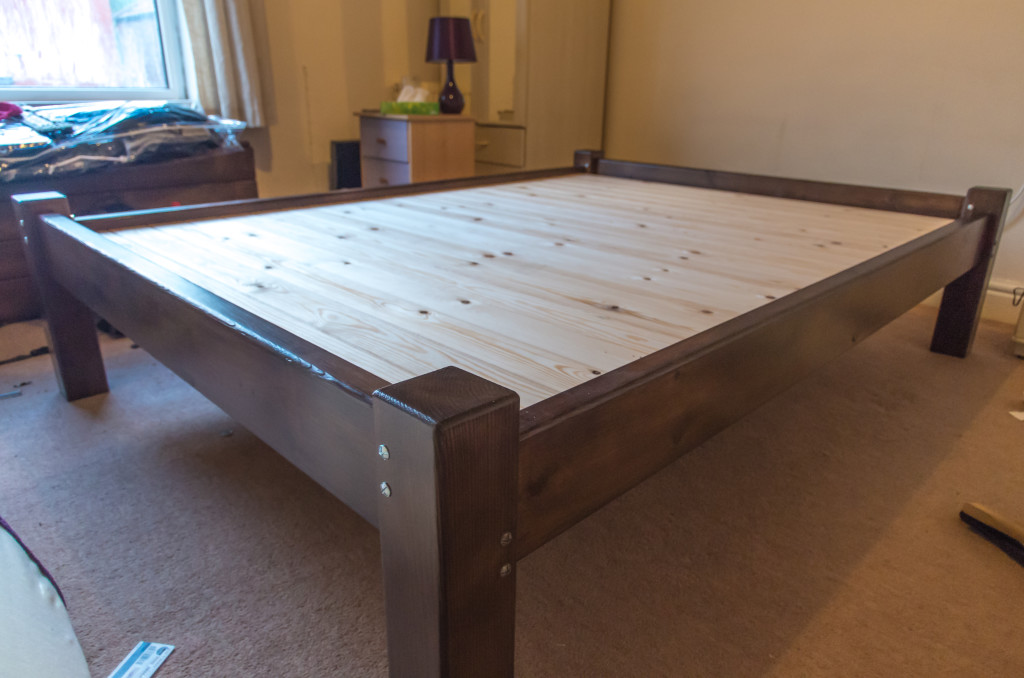 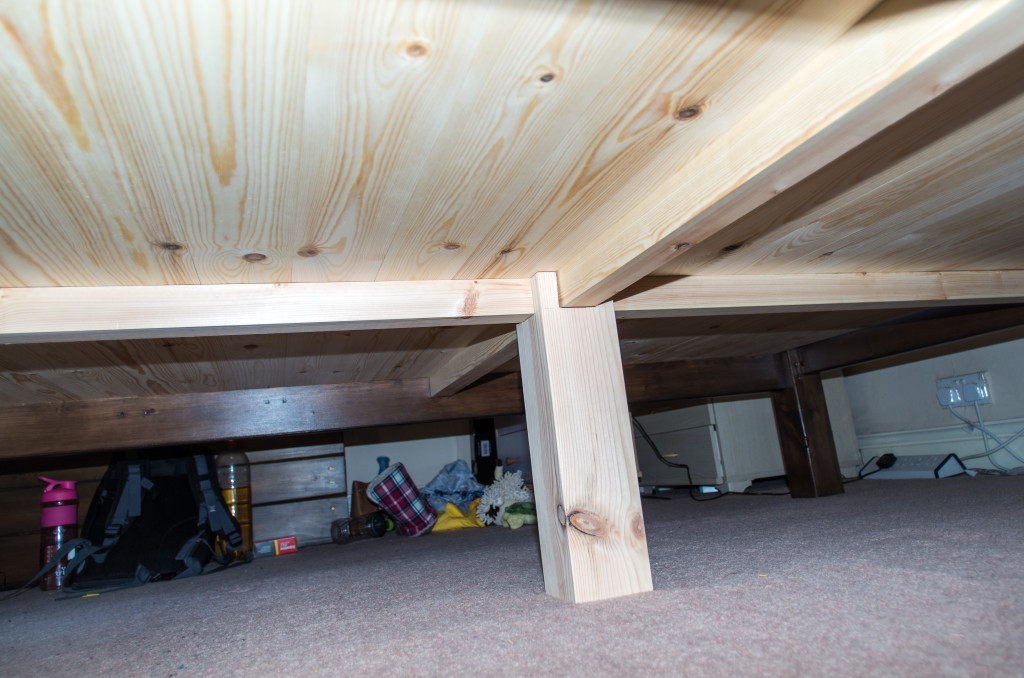 So there we have it, one finished double bed!